This is part of a series of posts about the IPTC Autumn Meeting 2019. In Ljubljana. See separate posts about Day 1 and Day 2.

Day 3 of the Ljubljana Meeting was where we got down to business: we hosted the 2019 IPTC Annual General Meeting, where Voting Members get to have their say on how the organisation is run, voting on the budget and the Board.

We are very happy to announce that Jennifer Parrucci of the New York Times and Paul Harman of Bloomberg were both voted as new IPTC Board members and Directors of the company, and that Robert Schmidt-Nia of DPA was voted as Chair of the IPTC Board.

On behalf of all IPTC members we would like to say thanks, and welcome!

Then we had the IPTC Standards Committee meeting where we approved the latest versions of two of our key standards: IPTC Photo Metadata Standard 2019.1 and ninjs 1.2. Stay tuned for more information on both of those very soon!

In the afternoon we had a visit to the Triglav Lab  where we were able to see some interesting developments in the Slovenian tech scene related to media. Thanks again to Aljoša Rehar from STA and Marko Grobelnik from Jožef Stefan Institute for their help in organising the afternoon. 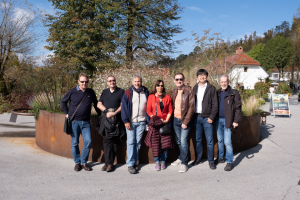 It was a great way to end a fascinating three day event!

Thanks again to Aljoša, Nejc, Marjana, Marko and the team from STA and JSI for helping to organise the event.